All of these are swatched with my fingers. This is one swipe, so the skipping you see on some of the colors is true to form if you go in too heavy with a brush. You will get kick-up. However, the product blends out so beautifully that I completely forgive this. My advice is to ‘pat’ the brush into the pan and layer accordingly. With all of these palettes, a little goes a long way. The shimmers imitate ‘skin’ much better than the mattes, with the exception of the contour palette. But with minimal blending (you really don’t have to work hard for this formula), you can get a skin-like finish with any of them.

I’m a fan. I’ve been using them all over my face (laziness rules) and so far, so very good.

This is a very short list. Two items made the top of my list for contour and highlight. I think you guys already know… 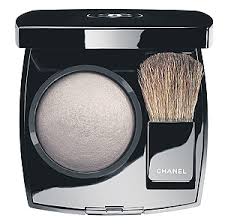 Chanel Sculpting Veil in Notorious simply defies everything we know about contour. It works on just about every skin tone under the sun, and doesn’t add color. It just adds ‘shadow.’ It’s amazing. The only crime about this product is that it was limited edition and sold out fairly quickly. I am completely in love with this product. If you can get it, don’t hesitate.

Kevyn Aucoin Highlighter in Candlelight is considerably easier to get. I love this stuff. You use such a little bit to add a whole lot of light to a wide range of skin tones. It just gives the skin a bit of a glow, like it’s bathed in candlelight.

That’s it! These are  my go to contour and highlight. I use them on myself and clients… they are absolute must haves for me.

Chanel released a cozy little limited edition collection of contrasting colors. Most of it was a pass for me. But the Ombre Contraste in Notorious… a strange purple grey concoction… was a no brainer. Meant to be used as a contour, I was curious about how it would translate on my warm skin tone.

Since Chanel used it on the palest models on earth for a fashion show, I had a pretty good idea of how it would translate on cool tones. Not a good look, because it has the potential to look like purple dirt. HOWEVER, now that I’ve seen it in person, I have to say that with a light touch, just about anyone… cool or warm… can use this product.

Looks like  a dark taupe, right? It’s not. There is a the faintest hint of red, and grey, and I’m fairly sure BROWN in there as well. That’s why I think it’ll be universal (I initially believed this would only be suited to warmer skin tones). What’s also noteworthy about this contour is that it’s sheer, so the skin will show through when you apply it.

I applied it very heavy so that you can see the true effect of this color on my skin tone. On my face, it will be much more subtle. I played around with contouring and was blown away by how effective this formula is.

I can confidently say that there is nothing like this on the market right now. This formula and the subtle mix of colors is unreal. And it’s REALLY kind of idiot proof. I dare say you can kind of slap this on, blend it in, and look contoured like a pro. I think that’s because the formula is so sheer, that it’s really hard to mess up. I am blown away by this stuff. Really.

It was sold out on the site for a few hours, but now it looks like it’s back up. So you can find out more about Ombre Contraste in Notorioius HERE.