Move over Suqqu… Anastasia has met your challenge on the ‘brow pen’ and exceeded some major expectations.

The Anastasia Brow Pen was a ‘why not’ purchase at the PHAMExpo… for a few bucks I wasn’t really going to break down if it wasn’t perfect. Turns out, it is.

This felt-tipped beauty comes in two colors: Universal Light and Universal Deep. Like the Suqqu pen, this one does not really show up on the skin. It is attracted to, and adheres to the ‘hairs’ on your brow (so you actually have to have hairs).

I also got the Brow Duality Pencil… but more on that later. As you can see, the brow pen is basically a saturated felt tip pen. I didn’t expect much, especially after I swatched it on my skin.

But then I used it on my brow, and I found out that you can ‘technically’ overdo it. This pen is amazing. But it’s Anastasia… of course it’s amazing. Brows are what they do.

That heart is covering a pimple… trust me, I’m protecting you guys’ vision. That thing is ugly, and I will not pick it! I’m being a good girl. But back to the brow… that was a quickie tryout. Took me five seconds. The pen naturally darkens the hairs of  my brow without making them look overly made up. It actually makes my brow darker than the Suqqu version. AND it’s easier to get here in the United States.

I asked for the the Brow Duality Pen in Shell/Lace, but things apparently got mixed up at the show (there were a lot of people wanting stuff) and I ended up with the pinker version in Camille and Sand:

I had a Brow Duality Pencil that I wore down to a gross little nub, so a replacement was long overdue. And I’m glad I gave the Brow Pen a shot. It’s pretty awesome.

You can find out more about Anastasia Brow Pen and Dual Highlighter HERE.

I went back to the Chantecaille Save the Sharks Palette for this look:

I couldn’t wait to use the new Becca Mineral Blush, so I got right to the business of doing an FOTD:

It’s time for a new giveaway! I thought I’d pay forward three of the most basic items in my regular maintenance. Meaning, if I only had 5 minutes to get ready, I’d most likely reach for these things. I’ll always want my brows done properly, I’ll always reach for a highly effective mascara, and I’ll always reach for a lip color that I know I can throw on in a dash… and be confident that it’ll be flattering.

So here’s what I came up with:

ULTA-MATE Brow Kit (Ash Brown) from Anastasia
Armani Eyes To Kill Mascara
Lipstick Queen Jean Queen
Since this picture looks like it was taken by the worst photographer on earth, here are some professional shots of the products: 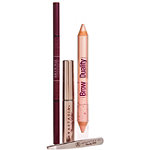 You guys know the drill. You must be a PUBLIC SUBSCRIBER to qualify. GFC is acting a fool, so I’ve removed it from the blog… but I can still see everyone on my dashboard. You can gain additional entries by following me on twitter @shahadakarim, and liking Adventures In Makeup on Facebook.
THE WINNER WILL BE ANNOUNCED JUNE 25TH
GOOD LUCK EVERYONE!

I mixed shimmers for this… but kept the overall look ‘warm.’ Back to the Senna Palettes… love these things!

I dug into the Senna Warm Envelope… I’m totally in love. The colors grab and hold with no primer needed on the face or the eyes. They oxidize slightly on contact, but stay put and wear beautifully all day:

This was mostly an exercise in ‘warm’ shading, with a bit of smoke thrown in for good measure…

I was in a theater, taking in Cirque Du Soleil: IRIS:

It was hubby’s birthday, so I took him to the show as a gift. Since he’s a filmmaker, it’s only natural that he’d be attracted to a show about a journey through the world of cinema. It was QUITE the spectacle… we really had a good time.

For the show, I wanted to do something a little ‘Old Hollywood’ with a shimmery twist. It didn’t quite work out that way. I ended up with lush lashes and a berry lip. Ah well, it was close enough:

LIPS
Guerlain Rouge G in #70
Beaute Lip Gloss in Allure
Tackled the last two colors in the 5-Golds quint: The Black and The Silver.

*The blendability of these shadows is so impressive! The silver and the black just merged together effortlessly. I am really loving this quint!*